"Break up of the Dysart Estate and the building of the council estate in Petersham - Kate Lyons - 20".

"Houses in River Lane were part of the Dysart Estate - Lilias Grey-Turner - 02". 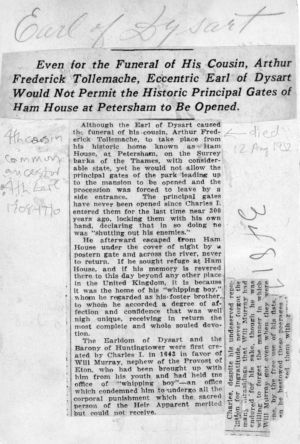 PUBLIC EVENTS AT HAM HOUSE hosted by the Earl of Dysart

1932 – Garden Fete and XV11 Century Masque Ball – in aid of the National Library for the Blind. Featured an exhibition of lawn tennis, a fun fair and stalls and Fortune Telling. The grounds were illuminated for dancing in the evening

EVENTS at HAM HOUSE hosted by the V&A

1998 – Recreation of the CIVIL WAR by local school children

HAM HOUSE AND GARDENS AS A FILM LOCATION